The Benefits of Directional Boring 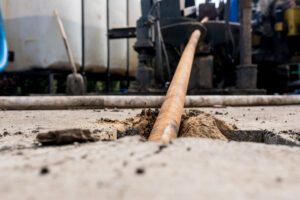 Directional boring or horizontal directional drilling is also used in the installation of utility pipelines and conduits. A pilot borehole is drilled along a pre-determined bore path from the surface with minimum disturbance. Directional boring is mainly used for making crossings under rivers, roads, and existing structures, with the purpose of installing pipes and conduits to transport different types of fluids and materials.

Directional Boring vs. Traditional Method
Open cut, or trenching, is the most common way to install and connect utilities, but it has some limitations. This method can only be used when the ground above the utilities can be disturbed and there are no buildings, roadways or other obstructions in the way. Directional boring can be used in the same situation where open cut excavation is planned, but it can also be used to go under roads, sidewalks, rivers, even houses if there is a need for it.

Construction Footprint of Directional Boring
Directional boring usually has a lower impact on the existing ground; meaning a lot less of the existing is disturbed. There is still damage that is done as with all construction equipment, but proper planning and patience can keep it to a minimum. The horizontal directional drilling machines—made by companies such as Vermeer—are heavy, run on tracks and tend to disturb or damage the area below them or where they transit.

Another area that will cause some trouble is the water used for the boring. The water will usually tend to come up to the surface of the ground. It normally causes minimal disturbances but can be a situation where sod or grass seed needs to be replaced in those areas. For the most part, horizontal directional drilling will only disturb the location the machine is set up at and any place that utilities need to be connected. In some circumstances, a drill can be set up on the side of the road, and the only disturbance will be from the footprints of the locator. If you are looking for minimal damage to your existing ground, directional boring is the method to be used.

What Are the Benefits of Directional Boring?

The Pros and Cons of Vacuum Excavators
November 2, 2022

Worker Safety In The Summer – How To Address Heat-Related Hazards
July 27, 2022
CONTACT US