The Pros and Cons of Vacuum Excavators 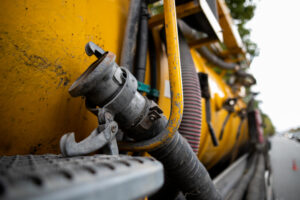 Vacuum excavation is important for underground work.  If you need vac excavation for projects of any size, contact us or click here for more information. The machines we use are specifically selected for individual job sites as there can be some pros and cons to using vac excavators. Learn more by continuing to read this article.

Vacuum excavation is the process of digging using suction created by a vacuum and is an alternative to mechanical excavation and manual labor.

Vacuum excavators appear quite dissimilar to traditional excavators. Vacuum excavator components consist of fresh water and debris tanks, suction tubes, hoses, pumps, and compressors. Depending on the needs of the contractor, they can be mounted on commercial-sized trucks or configured on trailers.

Think of a super-sized Shop-Vac® paired with a pressure washer when thinking of a vacuum excavator, often just called a ‘vac’. These machines utilize a high-pressure flow of water (hydro-vac), or stream of air, to break up the soil and excavate. The vac then sucks up the remaining dirt and debris from the hole, which is stored in the debris tank and hauled away from the jobsite.

“With hydro excavation, you are displacing the soil using water which creates a slurry and then you’re sucking up that slurry,” says Christopher Thompson, Ditch Witch Vacuum Excavation Product Manager. “So, you’re turning soil into a slurry, and then using the vac to remove that slurry.”

WHY USE A VACUUM TRUCK?

One of the greatest benefits of using a vac truck is its ability to remove soil, small stones, debris, and fluids without damaging nearby or underground infrastructure.

The teeth on the bucket of a traditional excavator can easily damage underground infrastructure, such as pipes and cables, whereas the airflow and/or water applied by the vac is considered a soft excavation method and is preferred to lessen the likelihood of damage. Any damages to underground infrastructure can cause some serious issues and affect many people. Hitting a water or telecommunications line is bad enough, but the stakes are even higher when excavators are operating around gas lines.

When installing underground utilities anywhere near existing infrastructure, best practices call for a vacuum excavator. For perpendicular installs, contractors can physically see the new install safely pass under or over what’s already in the ground by potholing, also called daylighting, to expose existing utilities.”

In some situations, vacuum excavators can even be used in place of a trencher. When trenching in an area where it is known there is existing underground infrastructure, but are whereabouts is unknown and can’t easily be detected, a vac can be utilized. Known as slot trenching, a vac can be used to dig a narrow trench without the risk of damaging whatever is already in the ground.

When digging in open areas with no existing underground infrastructure, a traditional excavator will get the job done fastest. While vacuum excavators use non-destructive means of displacing soil, this takes longer compared to traditional excavators. It is not practical for vac trucks to perform mass excavation for a new suburb, for example.

Another consideration when deciding to use a vac truck is the possibility that the dirt and water (the spoils) collected by the truck may not be able to be left on site. Depending on the regulations of local governments, once you introduce water into the soil, it might have to be brought to an offsite collection facility.

Trailers are also equipped with vacuum excavation equipment. You need a truck to tow it, but once the trailer is on location, the truck can be used for other purposes.

The advantage of having an attachment to having a vac truck is only needing one machine on-site, which saves on capital costs and labor costs. Now, an excavator operator can pothole a utility with the vacuum attachment and then switch to the bucket for digging.

Worker Safety In The Summer – How To Address Heat-Related Hazards
July 27, 2022